Jimbobart
By Categories
By Designer Brands 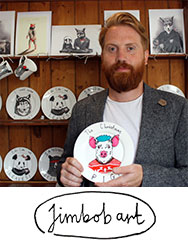 Jimbobart founded by London-based designer James Ward. From his studio and new shop on Cheshire St in East London, he creates a range of ceramics and illustrations centering on his expressive animal drawings. As a commercial illustrator, he has been commissioned by Lacoste, Moleskine and Etsy - who invited him to illustrate a bath tub displayed alongside his designs as part of the UK's leading independent design festival, Clerkenwell Design Week. To date, Jimbobart has featured in National newspapers and magazines including the Guardian, The Sunday Times, The Telegraph and Country Living, as well as numerous design magazines.

Thank you for you subscription to our newsletter.